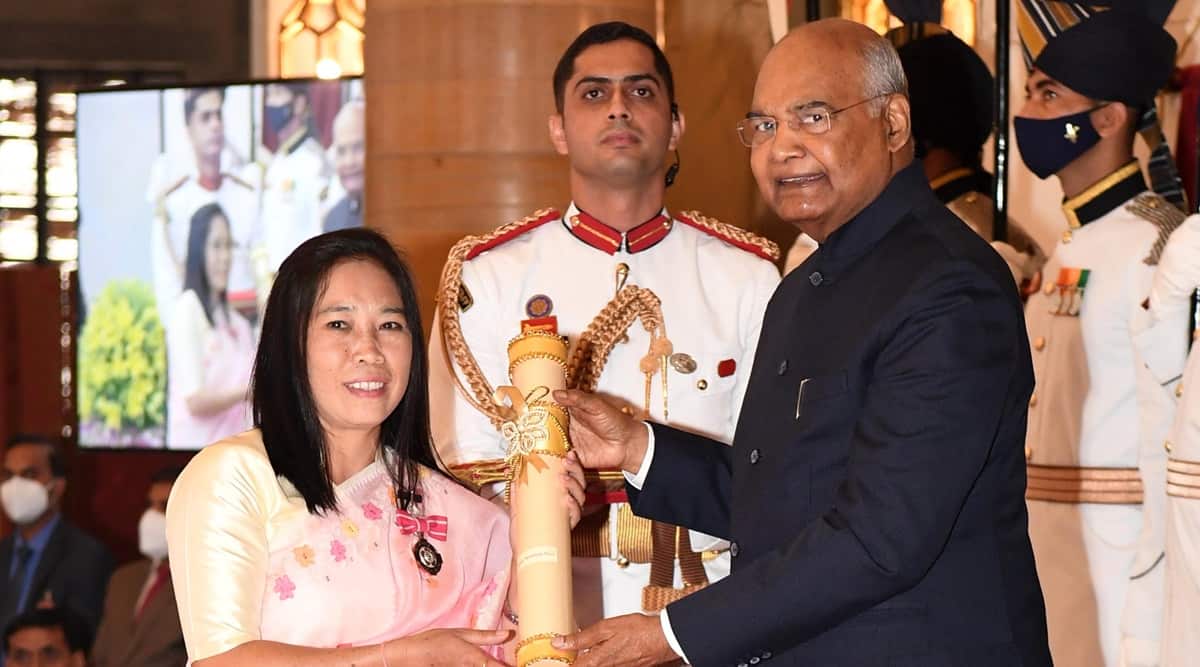 For years, Oinam Bembem Devi had seen Indian men’s football’s best get recommended for the highest sporting awards in the country. And the Padma Shri, an even greater accolade.

The Late Gostho Paul, Late Sailen Manna, Late Chuni Goswami, Late PK Banerjee, Bhaichung Bhutia and Sunil Chhetri – all have been recipients of the fourth highest civilian award. But now, after 20 years of service for the national team, Devi too has joined that elite club, as she became the first women’s footballer from the country to have been given the honour.

Congratulations to Oinam Bembem Devi, the Durga of Indian Football, on receiving the Padma Shri Award. It is truly a moment of pride for all of us in Manipur. May you continue to inspire the young girls and boys to pursue their dreams.@PMOIndia @OfficeofJPNadda pic.twitter.com/lYZfNEDKMm

“I feel this Award will inspire the younger girls. This is the fourth highest civilian award in India, and a woman footballer being awarded with it will motivate younger girls to do better and dream big,” said the 41-year-old.

“There is recognition for women footballers in India, and nothing can be more positive than that. I have been overwhelmed by the wishes and love from the people. People have been happier than me. Everyone was so happy. This award is for everyone.”

RK Nimai Singh, the former Commissioner of Youth Affairs and Sports for Manipur and Eastern Sporting Union football club’s owner, knows a thing or two about Devi. She played for his team from 2016-2018 and also coached them while playing in 2017.

“She fully deserves the Padma Shri award. She’s not only an excellent footballer, and now coach, but a very nice human being with no airs. She’s simple, honest and hardworking,” he told The Indian Express.

The award though is just the starting step. Speaking at an AIFF-organised press conference, Devi spoke of the need for women footballers to earn more money and how the current version of the Indian Women’s League didn’t allow for this to happen.

“Women players do not get good money while playing for a club in the IWL (Indian Women’s League). They (club owners) will always tell the players to take less amount of money, say Rs 50,000 or Rs 60,000. This amount is peanuts actually,” said Devi.

As of 2020, the IWL’s top performers were being grossly underpaid as compared to their male counterparts. Champions Gokulam Kerala pocketed Rs 10 lakh for winning the league while the top goalscorer and best goalkeeper won Rs 1 lakh each. This is in stark comparison to the men’s top-flight Indian Super League (ISL) where winning teams and runners-up are awarded over crores in prize money.

Devi said that one of the reasons for the lack of money was down to dwindling corporate sponsorships. She also said that the lack of corporate interest in the women’s game meant that there was no scope for further tournaments in a football ecosystem that provided only two events – the IWL and the senior national championships.

This meant that players in the state level suffered because, unless states sponsor or hold tournaments, there were very few avenues for women footballers to break out into the national team.

Going up against the big names

Devi’s words come at a time when India is set to host the AFC Women’s Asian Cup next year and has been stepping up on friendlies and exposure tours. Ranked 57th in the world, India is in Group A along with China, Chinese Taipei and Iran. The women’s team recently beat both Chinese Taipei and Iran and could be in with a chance to qualify for the knockout stages. Two of the top four teams from each group will progress to the next round while two more of the best third-placed teams have an opportunity to join them.

“Hosting the AFC Women’s Asian Cup is a huge move. But let me tell you anything can happen in football. Brazil hosted the FIFA World Cup but went down 1-7 to Germany. It’s hard to predict whether we will qualify for the quarter-final of the AFC Women’s Asian Cup. It all boils down to hard work, and a bit of luck,” Devi said. “We need to play as a family.”

The Indian women’s team is set to visit Brazil later this month for a tournament where Venezuela and Chile will also compete. Brazil is set to roll out a full-strength squad and Devi is excited to watch some of her former teammates play against some of her footballing idols.

“Brazil are World Cup (2007) runners-up and ranked seventh in the world. Playing against them and also against Venezuela and Chile should give the girls a lot of confidence. Brazil’s captain Marta is my idol and our girls are lucky to be getting a chance to play against some of the top players and teams,” she added.

Sooryavanshi director Rohit Shetty visits Ashish Chanchlani’s theatre: ‘Life has been nothing short of a miracle’

‘Will accept caste-based census if all parties agree’: Mamata Banerjee after Modi-Nitish meeting

Sunday Zodiac: What each sign should keep in mind in matters of marriage