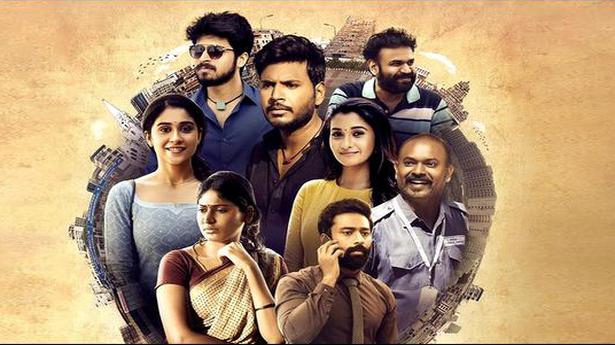 Chimbudeven’s six-segmented film boasts of a sprawling ensemble cast and some intriguing performances, but isn’t cohesively stitched and fails to engage

Chimbudeven’s Kasada Tabara begins with a couple of definitions. One: the vantage point, a position from which something is viewed (a change in this can drastically alter one’s view). Two: the butterfly effect, the phenomenon whereby a small change can have dire far-reaching consequences elsewhere (you must have heard of this in Dasavatharam or The Butterfly Effect movie itself). Both these concepts aren’t new to cinema; not even to Tamil cinema.

We know from the trailer and interviews that Kasada… is a hyperlink film, i.e. the characters inhabit separate stories that are connected. This format too isn’t new. Chimbudeven himself admitted this in his interview with The Hindu: “Thiruvilayadal (1965) is a hyperlink subject, with Lord Shiva being the common link. My film has six episodes that are connected in some way.”

Chimbudeven’s idea probably was to stitch together different pieces of cloth into an exquisite costume with the help of several tailors. The result, however, is a chaotic patchwork.

A mishmash of elements

Quentin Tarantino’s Pulp Fiction is another hyperlink film that begins with a definition. Much like the cult classic, Kasada… too has an assortment of intriguing characters: there’s a God, a don, a conman, a police officer with a no-kill policy, and others. There are encounters, betrayals, romances, and near-death scenarios. Despite all these, the film rarely intrigues.

The prime suspect is the writing. Neither the situations nor the dialogues pique our curiosity (there are a few exceptions like Sendrayan’s character describing chicken clear soup as kozhi moothram). Take the first segment of the film, for instance. Bala (Premji Amaren) is a God-fearing, quintessential nice guy. One of the ways the film establishes his niceness is by making him feed stray puppies. A snarky front-rower in the cinema would have quipped, “Idhellaam naanga Aasai laye paathutom!”

Chimbudeven has also intentionally veered away from comedy, which is actually his forte. But even the few jokes fail to tickle. Case in point: A junior police officer tells his superior that he is coming from a temple. The superior appreciates him and ends his reply with, “So sweet!” Junior officer: “Aama sir, pongal eppavume sweet ah dhaan irukum..”

Is this the same guy who wrote Imsai Arasan 23am Pulikesi?

The problem is that even the serious moments don’t quite work. Thiripura Shanmuga Sundari aka Trisha (Regina Cassandra), the girl who likes Bala, has an epiphany just because he tells her about a Shiva annan, who owns a beeda stall beside a luxury hotel. Trisha, within seconds, changes her mind from idolising the luxury hotel’s owner, because Bala tells him the beeda stall owner is leading a content life.

These far-too-convenient life-altering realisations occur more than once. Sampath Raj, who plays a don, is shown feeling bad for a guy who kept a knife against his neck, just because another character tells him he’s a do-gooder. Upon overhearing his son’s (Shantanu Bhagyaraj) disappointment with his activities, he decides to give up his life of crime. That the scene is somewhat convincing, is due to Sampath’s performance.

Some of the actors from the sprawling cast (including Sundeep Kishan, Harish Kalyan, Priya Bhavani Shankar, Venkat Prabhu, Vijayalakshmi, and Sija Rose) make their characters look more interesting than they are on paper. But the writing falls flat. Too often, they are seen mouthing expository lines (the segment with Harish Kalyan can be called Enai Noki Paayum Voiceover) or philosophy (the characters quote Bhagavad Gita and so on).

The last high-profile hyperlink film in Tamil cinema, Super Deluxe, also got philosophical, but only after taking us on a dazzling ride. Kasada… meanwhile, feels like a stuttering ride in an old car with mostly boring songs playing on the radio.

What is the political statement Vijay is trying to make with...