Obamacare help was in high demand 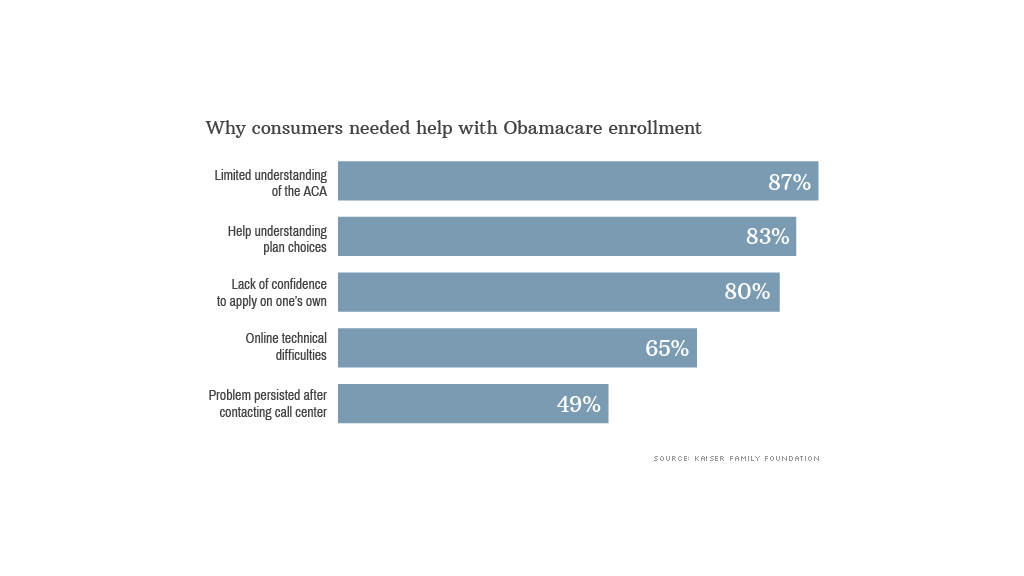 Signing up for Obamacare was anything but easy.

It wasn’t as simple as filling out a few forms.

People who signed up for the Affordable Care Act insurance found they had to answer questions about income, taxes, family size and immigration status. There were also multiple choices available for plans that were not very different from each other.

But, guess what? People reached out for help.

During the enrollment period, about 10.6 million people received personal help from navigators and other enrollment assisters, according to a report released Tuesday by the Kaiser Family Foundation.

The assistance was time consuming: 64% of the programs reported spending an hour to two hours with each consumer on average. Funded by federal and state governments as well as outside sources, there were about 28,000 individual assisters and navigators across the country, the survey found.

Almost 90% of assister programs surveyed reported that most or nearly all of the people they helped were uninsured.

Assistance was not distributed equally across states.

People in states running their own healthcare exchange were twice as likely to receive help with enrollment. Those 16 states had about twice as many assisters per 10,000 uninsured Americans compared to the 29 states that defaulted to a federally-facilitated exchange.

The discrepancy is not terribly surprising: the states running their own exchanges had significantly more funding available for outreach and enrollment. The Centers for Medicare and Medicaid Services awarded a much smaller $67 million in federal grants to fund navigator programs in the 34 states with federally-facilitated or partnership exchanges.

In the end, it wasn’t the broken website that was the main reason people sought help — it was a lack of understanding of how Affordable Care worked. More than 85% said that most or nearly all had a limited understanding of the new healthcare law, and needed help understanding their plan choices.

Three out of four said that most or nearly all needed help understanding basic health insurance terms.

“How can you explain coverage options to someone who doesn’t know what a deductible is?” said Karen Pollitz, lead author of the survey. “It’s just a much longer conversation.”

The need for help selecting the right plan is not likely to disappear in the coming years. Some consumers are starting to come back with post-enrollment problems, Pollitz said.

“It’s a fundamental need people are probably going to have for the foreseeable future,” she said, especially as consumers experience a change in family size or employment.

FA Cup: Steward Gets Smacked In The Face By Wayward Penalty In Weymouth vs Yeovil Town Game. Watch

Goan Family Restaurant Is A Hit In Canada. It Started With Butter Chicken

Stocks Poised to Open Slightly Down on Monday