Taking the pulse of the ocean’s comb jellies 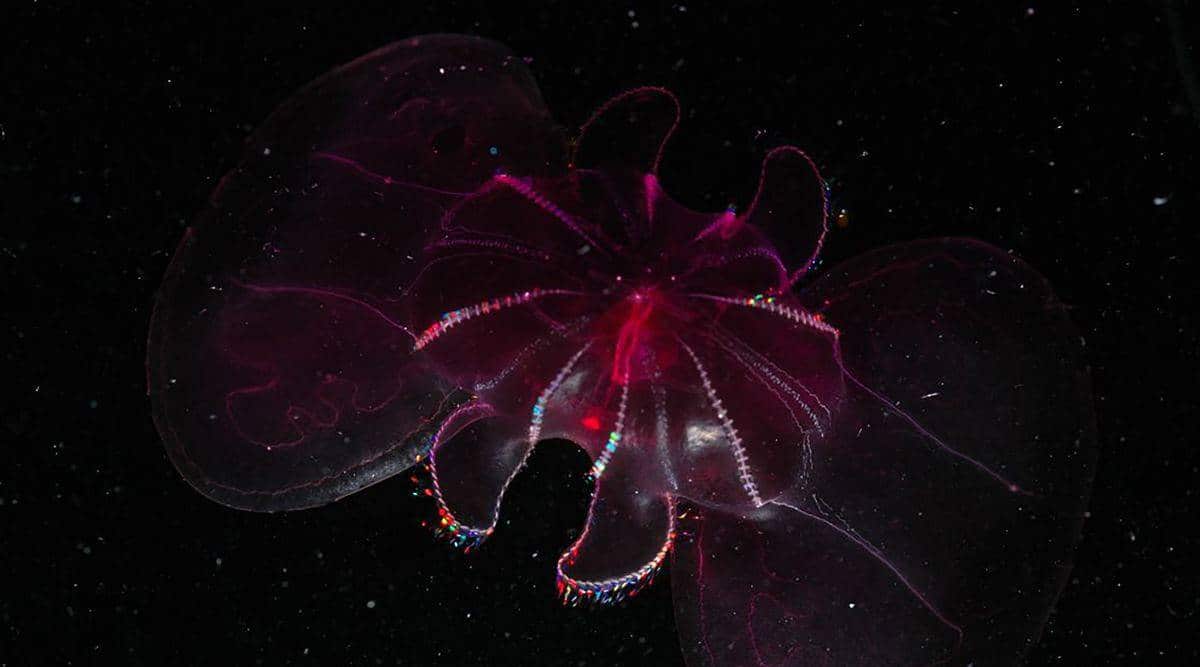 The enormousness of the global sea has, over ages of exploration, made the appraisals of prime inhabitants more like rough sketches than detailed portraits.

Now scientists have devised a precise way of detecting one of the ocean’s more exotic creatures. Estimates of its global abundance, they say, will likely soar.

The organisms are known as ctenophores. While looking superficially like jellyfish, they have no stingers and none of the usual body pulsations and rhythms that power jellyfish. Instead, what moves them through seawater are pulsating rows of feathery cilia. The tiny hairlike bundles resemble the teeth of a comb, giving the creatures their other name: comb jellies.

An undated photo provided by Shannon Johnson shows a type of comb jelly known as Bolinopsis. New kinds of molecular probes are revealing the true extent of ctenophores, a form of ocean life that has long eluded firm reckonings. (Shannon Johnson via The New York Times)

Undulations of the cilia let the creatures glide forward to sweep up prey and particulate matter. Adults range in size from a few inches to a few feet. Ctenophores live throughout the world’s oceans, from the abyss to the sunlit zone. Some 200 species have been identified. Most are bioluminescent. Typically, the colors of their lights are bluish or greenish, often shimmering or iridescent.

Four scientists have introduced a new way of identifying ctenophores in a paper that was published online last month and is soon to appear in Molecular Ecology Resources, a monthly journal. Steven H.D. Haddock, a co-author at the Monterey Bay Aquarium Research Institute in California, said the team worked on the problem for about five years and drew on a wide array of specimens gathered over decades. He said the advance will give “much-needed precision” for biologists seeking to learn the true dimensions of oceanic life.

If used widely, Haddock said, the method could result in the number of known species of ctenophores rising from 200 to around 600 and possibly as high as 800.

“It’s like fingerprinting,” Haddock said of the technique in an interview. “It’s one of the next big things in assessing who lives in the ocean.”

The new method applies a powerful new means of animal identification to the world of ctenophore research. It’s known as environmental DNA sampling. Instead of directly observing or testing an organism, it collects and analyzes snippets of DNA that all creatures shed in their environment. From such castaways as hair, skin and mucus, scientists compare the environmental samples of genetic code to DNA libraries, seeking matches and identifications.

The procedure has already been used for other identifications. For instance, it has helped disclose the hidden presence of critically endangered organisms, including an aquatic insect known as the scarce yellow sally stonefly. Researchers also used it to demonstrate that Scotland’s famous Loch Ness was filled with eel DNA more than anything monstrous.

But before these analytic tools could be applied to ctenophores, advances were required. Haddock’s team designed a battery of new molecular probes that made it possible to perform deeper DNA interrogations.

“It’s like being able to read a new language,” he said.

In a series of tests, the results let them identify 72 ctenophore species via their genetic signatures — some five times more than had been reported in earlier databases and GenBank, a library of genetic codes from thousands of organisms that the National Institutes of Health maintain.

The precise tools, the scientists say, will let researchers look with new precision on the DNA sequences they recover from the wilds and better understand the true diversity of marine life. And that, in turn, will aid global conservation, fishery management and the assessment of such things as the impact of climate change on ocean biodiversity.

“Ctenophores are largely overlooked in diversity studies because most are too fragile to sample with trawl nets,” Haddock said. “With this study, we’re trying to overcome that and give people a chance to appreciate just how special and diverse these creatures are.”

This article originally appeared in The New York Times.

The future of commentary must work harder to get there

Watch | In conversation with the cast of ‘My Name’