‘The Witcher: Nightmare of the Wolf’ review: Toss a coin to this great prequel 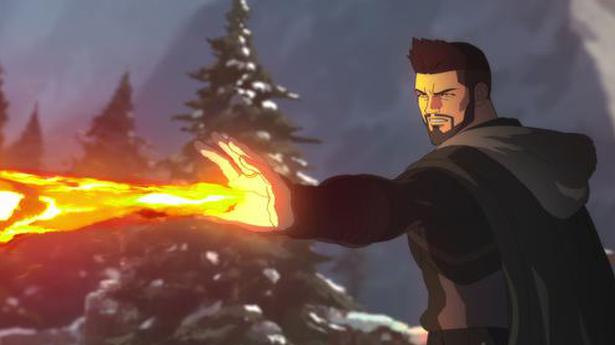 The world of ‘The Witcher’ takes on an animated avatar in this must-watch film with remarkable voice acting from Theo James, Lara Pulver and Graham McTavish

While we wait for the second season of The Witcher, there have been a few things to keep us content in the meantime; hunting for Easter Eggs in the first season through a couple of repeat binges, delving into the inches-thick books by Andrzej Sapkowski, or playing a few rounds on location-based Augmented Reality game The Witcher: Monster Slayer or the AAA games by CD Projekt Red.

Each of these satiated some scale of impatience but none performed the way The Witcher: Nightmare of the Wolf does.

Nightmare of the Wolf follows the journey of golden-eyed witcher Vesemir (Theo James) who is to become Geralt’s mentor. Times are tense as the ruling monarch wants to rid the lands of witchers, but witchers are the only ones who can fight off the creatures that terrorise humans. The plot against the witchers is fuelled by an ice-cold sorceress Tetra Gilcrest (Lara Pulver).

The opening scene of the film, set against a sombre song about death, sees Vesemir save a young noble from a leshen (if you are familiar with The Witcher games, you’d know how bloodthirsty this scene would be). What may seem like a typical heroic entry, actually marks the point of contention for Vesemir when the leshen speaks to him.

Read More | ‘The Witcher’ season one review: A riveting show, but falls just short of being truly great

Fans of the animated series Castlevania will find a delightful overlap in terms of voice actors; James and McTavish play Dracula and Hector respectively. McTavish’s baritone voice is unmistakable in his role as an elder witcher Delgan. The actor’s authoritative vocals help bring out his character’s conflicting natures and the trademark Scottish brogue make Delgan all the more a joy to watch.

James, like McTavish, has established himself as a marketable voice actor; as Vesemir he channels cunning and passion for the cause, drawing audiences in to trust Vesemir from the very first scene. Like many, I am looking forward to more voice work from James.

The anime-esque aesthetic courtesy Studio Mir is mesmeric; the same studio that gave us The Legend of Korra and Avatar: The Last Airbender adopts an edgier style for the fantasy-action world of The Witcher. Blood spatters are aggressive yet not overtly gory, dangerous lands hold foreboding hues and lines while the play of light and shadow make for a very real and immersive watch. When a film is done this artistically, it justifies the animated medium all the more.

The score from Brian D’Oliveira enhances the tones of the film, through string-heavy compositions. D’Oliveira, who also penned the music for the much-loved Resident Evil: Village video game, has certainly brought his musical chops here.

That said, Nightmare of the Wolf does not drag its feet at all, but the film is still generous in its doses of dramatic relief and artful sequences in between the action. The dialogues are non-cringey with some modernised lingo but still come off as poetry, especially during impassioned speeches. I was thrilled at how satisfying the film’s arc is; there are no cliffhangers and all the characters’ storylines are done justice.

You may find the 80-minute watch fly by, but the rewatch value is strong with this one, especially if you, like me, love going back to look for Easter Eggs.

Writer Beau DeMayo and director Kwang Il Han did well in bringing this portion of The Witcher world to the screen, parleying equal measures of heart and action into the story. Do not miss The Witcher: Nightmare of the Wolf, as it will give you more reason to

The Witcher: Nightmare of the Wolf is streaming on Netflix.

Waqar Younis apologises for ‘Namaz in front of Hindus’ comment

We may need to start thinking about Tesla at $3 trillion: Morning Brief